How can we help you today?

This information is provided "as is" and you use this information at your own risk. The author is not a CFI. Talk to your CFI if you have any questions about proper operation of aircraft.

It is the club standard to always operate the N245SR engine lean of peak during cruise.

Some members of the Cirrus Owners and Pilots Association (COPA) have reported engine lifetimes well beyond TBO using the techniques outlined in this article, and stories abound of mechanics being shocked at the great condition of engines that are run lean of peak.

This article is based on the work of longtime COPA member Gordon Feingold, who wrote a detailed article about lean of peak operations. Portions of his article included below.

If you want a quick and easy way to ensure the engine is running in a safe manner, without excessive cylinder temperatures or pressures, do the following once you level off from your climb:

That's it! You'll be running lean of peak with the engine in a safe place.

Before diving into the procedure, it's important to understand the "red fin" diagram. 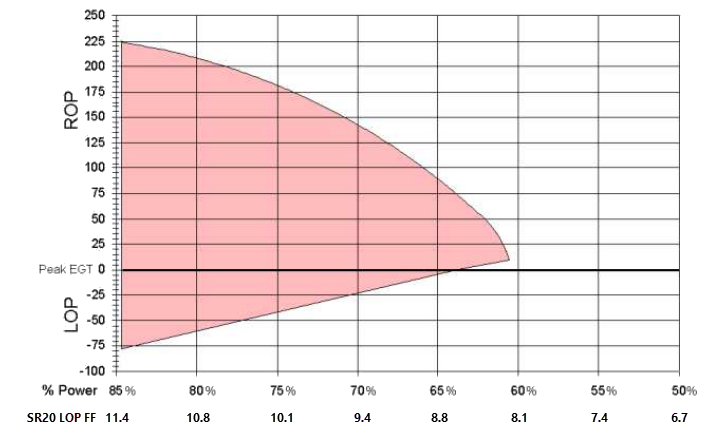 The area shown in red is where the internal cylinder pressures and temperatures are the highest, and most destructive to the engine. We want to avoid operating in this area as much as possible.

The scale on the left shows degrees rick of peak EGT (positive numbers) and degrees lean of peak (negative numbers). This will be important later as you read through this article.

The data shown above can also be represented in table form. This table will be used during the leaning procedure. 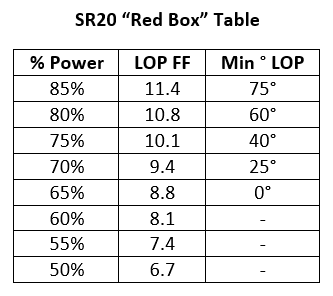 Here is an image of the checklist. Click to enlarge:

The first thing you'll do is set your power. If you use the Density Altitude readout on the MFD engine page, it will be easy to adjust for cold or hot weather that may otherwise impact the engine's performance and your ability to use this procedure.

The so-called “Big Mixture Pull” is a means of setting the mixture control to “park” your engine in a safe place. This will place your engine well lean of peak by moving rapidly “through the mountain” of peak temperatures and pressures to a safe place on the lean side.

To perform the Big Mixture Pull, pull back on the mixture control smoothly and fairly rapidly until you feel the airplane decelerate. Stop! You’re there. The pull should take about 5 seconds or so. Do NOT enrichen a little when you feel the deceleration.

Any time you want to park your engine in a known safe place, such as before finding peak EGT or for level-offs during climb or descent, just perform a Big Mixture Pull.

Since you’ve just done a Big Mixture Pull after leveling off, you’re done with maintaining takeoff EGTs for your climb, so switch back to the MFD’s engine page and press the Absolute button. Give the engine a minute or two until the EGT’s stabilize.

Now we’ll use the eMax’s “Lean Find” capability to find peak EGT, but we’re doing it from the lean side of peak rather than the rich side. This is better for two reasons. First, the power curves are steeper on the lean side of peak, so you’ll be spending less time in the “red box,” and second you are looking for the first cylinder to peak rather than the last, also resulting in less time spent in the red box.

Press the “Lean Assist” button and begin slowly enriching the mixture. Watch for the first cylinder to peak (it will turn blue on the screen).

When I say “first cylinder, I do not mean cylinder #1 – I mean whichever cylinder reaches peak first! You’ll likely find it will be the same one every time.

When that first cylinder peaks, immediately press the Normalize button to “zero” that cylinder at its peak EGT. Then pull the mixture back lean again to a “safe” place well lean of peak.

(See the The Red Box section, above, for the red box referenced in this section.)

So to set your mixture so as to respect the red box limits, you first need to know, at any point, how much power you are producing. You can then look at the table, find the row for that percentage of power, and make sure you are at or outside of the limits shown for that amount of power.

For example, if I’m developing 70% power, I can look at the table and see that for that power setting I need to be 25 degrees lean of peak or leaner (i.e. -25 degrees or more negative).

So now that you know how to get the EGT limits from the table, you need one piece of information to set your mixture control: “How much power am I developing?”

Lean of peak, the answer is surprisingly easy, because when lean of peak, power is directly proportional to fuel flow. It turns out that you can simply multiply your fuel flow in GPH by 15 to obtain horsepower. Dividing your horsepower by 200 (for the SR20) yields percent power.

To make this easy, the red box table does this for you. Find your fuel flow in the second column and look over to the first column to find your percent power (interpolating if necessary). So the table tells me that if I am lean of peak and my fuel flow is 9.4 GPH I am developing 70% power. You can use the “red fin” graph’s horizontal axis for this purpose as well. Note that the eMax display of percent power may be way off when LOP! IGNORE IT! Use the red box table (or that factor of 15 and a whiz wheel), not the eMax display, when LOP.

So how do you use all this knowledge to set your mixture in flight? Easy. Here’s an example.

Assume you’ve leveled off, done the big mixture pull, found peak EGT and normalized there, and have leaned again back to the safe region. You will use the normalized reading from the first cylinder that peaked for this procedure. Ignore the others. Let’s call this cylinder the “key cylinder.”

Look at your fuel flow and find where it is in the table. So let’s say your fuel flow is 9.4 GPH. You can quickly see from the table that you’re developing 70% power. Now look on your engine page and see where your normalized key cylinder is relative to peak EGT. Let’s say it is showing -50. The red box table says you must be at 25 degrees LOP or leaner at 70% power (in other words, ANY setting at or leaner--that is, more negative--than peak EGT is OK).

So you can enrichen the mixture, let’s say to 10.1 GPH. A glance at the table says you’re now developing 75% power. Say you look at your normalized key cylinder and see it now shows –40. You look at the table and you see you’re done. Your -40 degree LOP setting is right at the red box limit for 75% power.

Did you find it helpful? Yes No

Send feedback
Sorry we couldn't be helpful. Help us improve this article with your feedback.